Magical Concepts — Not Magical but a Good App

Home>Magical Concepts — Not Magical but a Good App

Magical Concepts — Not Magical but a Good App 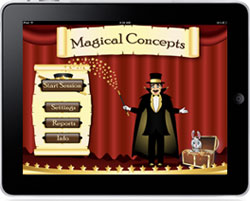 Magical Concepts: This app, by Virtual Speech Center, is similar to their Auditory Workout app that I reviewed in August, 2011. It has a database that holds the date, time, and score for each session for each student.  Reports can be accessed by activity or date and time. One has the option of emailing reports.  Overall the app is colorful and the pictures easily recognizable even though there are some slight picture distortions, like what happens when an image is copied and then made longer or wider on the screen.
The app focuses on the comprehension of more than sixty quantitative, spatial, temporal, and social-emotional concepts. Any number of concepts can be selected for each student. The screen clearly indicates the concept being worked on, the name of the student and the accuracy of responses in percentages. Each screen offers three answer choices. The student listens as the narrator says, “Show me_______,” after which the previously opaque choices change to vibrant colors, indicating that it is time to tap on the one of the choices. One taps on the repeat button to hear the instruction again. If the student’s selection is correct, a star appears. The narration for this app is excellent. The Settings screen allows one to select a number of features such as automatic paging, and scoring. If one turns off automatic paging a Go button needs to be tapped after the student has tapped on his answer. A third button, Next Page, appears at the bottom of each screen after the student’s response has been determined to be correct or incorrect. This button allows the student to proceed to the next page. The app allows for there to be multiple users during a session by changing the User Alternate Count. This option is great when there are two or more children in one session who are working on the same goals. The reward for earning a set number of stars (determined by the adult in Settings) is the Magic Show. In this app, the student is an observer of a magician doing a short magic hat trick. I would have preferred a reward where the student is an active participant as is the case with Auditory Workout.
Ages: 4-8
Ratings: +++1/2
Developer website: www.virtualspeechcenter.com
Costs: $9.99; available for iPad/iPhone only