Videos and Signing Are Included in This Vocabulary App

Home>Videos and Signing Are Included in This Vocabulary App

Videos and Signing Are Included in This Vocabulary App

Vocabulary Builder 2 by BumbleBee Kids: This vocabulary app offers 23 words appropriate for the developmental ages 12 months to 3 years. The product description states that the app is appropriate for late talkers, children with autism or PDD and children with speech delays. I question its value with the last group, but more about that later.

The vocabulary is presented in two ways: picture cards and video. Each vocabulary picture card has a video associated with it that demonstrates different ways the item may look, how it is used and places it may be found. There is also an option for viewing the ASL sign version of the picture.

Real items are used in photos and its written word is below it. The photos clearly depict each item. To the right of the photo are four buttons. The top bottom is a picture of a television. That button takes one to the video. The second button is a thumbs up sign. Tap on it and a screen shows someone signing the word as the word is said. The third button is a question mark. Tap on it and a screen appears with item. A narrator asks a question, the question is answered and followed by a demonstration. For example, for the vocabulary item “bib,” the narrator asks, “What does a baby do with a bib?” The question is answered by a child who says, “A baby wears a bib.” A video of the mom putting the bib on the baby follows. The last button has a picture of a girl’s head. Tap on it and a screen follows with a closeup of a woman saying the word. 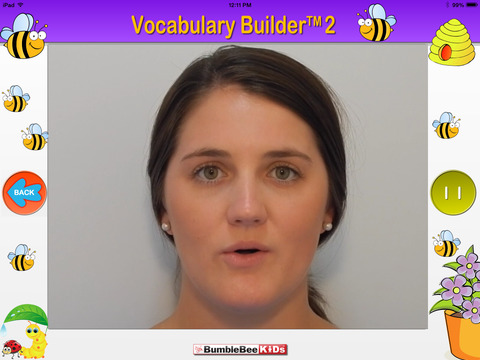 I guess I am an SLP stickler. As a stickler, I noticed numerous issues with the app. The first issue is, if the vocabulary word is a singular such as “balloon,” I prefer to see one of that item. Multiples changes the word to “balloons.” The videos in this app do not make this distinction. The video shows single as well as multiple balloons and all fall under the word “balloon.” When I work with children who have delays I prefer to work on one concept at a time. Mixing up single and plural muddies up the waters a bit for me, unless I am working on the singular/plural concepts, and it may cause confusion for some children. Another issue, I think that the lesson, of learning a specific word, gets lost in the rapid sequence of videos. A counter argument might be that the videos demonstrate the various settings and uses for the selected vocabulary word. That is a good thing. Perhaps if the video sequences had longer pause time between them I might have felt otherwise. The videos in this app are also problematic because the audio is not always in sync with the visuals. Sometimes the audio was delayed or partially came through. In some parts the mouth movements were not in sync with the speaker’s mouth movements. I found other issues with the videos. I felt that often the narration was fast and the words were not always clearly articulated. This brings me to the question, how does this app benefit children with speech delays? I cannot really say.

I praise the developer’s attempt to bring real life scenarios to the learning of vocabulary thus expanding the child’s understanding of each word. The inclusion of the signing option is a nice plus and adds to the varied presentations of words.

This app comes in at 500MB making it one of the largest I have. This may be a consideration for those who have little room left on their iPads.

Any cookies that may not be particularly necessary for the website to function and is used specifically to collect user personal data via analytics, ads, other embedded contents are termed as non-necessary cookies. It is mandatory to procure user consent prior to running these cookies on your website.

SAVE & ACCEPT
Go to Top